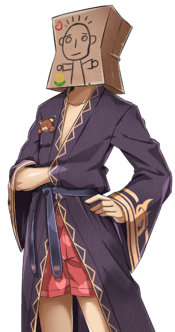 He may look zany wearing a paper bag with his daughter's drawing over his head and laughing all the time, but Pesop had met many adversities in his life. A failed attempt to save his wife using forbidden alchemy resulted in the loss of his daughter, along with his face.

In the past, Pesod had a wife and daughter, but unfortunately one day his wife died due to unmentioned circumstances. Willed with grief, Pesop wanted nothing else but to bring his deceased wife back to life. In his quest to do so, he research into forbidden alchemy. Ready to try to revive his wife, his attempt when horribly wrong, in the disaster, not only was he unable to revive his wife but his face became disfigured and he lost his daughter in the process. After that day, Pesop continues to live his life masking his face behind a bag adorned with a drawing his daughter had made and masking his grief behind his zany personality. Despite trying to hide his misery and grief away, he had let his lifestyle go, falling into debt and unable to pay Steel his rent.

Edel certain the fires in the Burnt Forest were not normal flames, Edel asked Pesop to analyze the fire. Amazing by the undying flames, his curiosity lead him to conduct less than conventional tests on the flame to the Aisha and Elesis's confusion. He proposes that one of the Holy Beasts was to blame and asks the El Search Party to gather more of the fire's embers to further his research. After investigating the embers Pesop concluded that the Fire El that the forest spirits possessed where being tainted by darkness. The group went off to find Ignia but she had seemed to disappear from town.

Able to capture Steel's father, Sdeing. Upon reaching the Phantasmal Geyser to investigate the water, Chung notices the strange scent. Pressed to save her dad, Steel took a sample and brought it back to Pesop. Pesop noticed that the water had obviously been manipulated, giving off a dizzying aroma. With Eve's help, Pesop recognizes the altered water as action much like a sort of charm potion, but to an extreme degree. Looking through his alchemy recipes he find a cure and asks the El Search Party to gather him the necessary materials. Successfully brewing an antidote, needing to cure everybody in the Phantasmal Geyser, Pesop told everybody to pour the antidote into the springs. However Pesop's plans here halted since Sirena was blocking the way of the El Search Party. Defeating Sirena, they poured the antidote into the springs and the mind control effects began to wear off. While the mental scars had been healed, those affected were still in a dire condition, Pesop mentioned Sirena's Crystal Ball and says that the spirits held inside it may be able to heal those affected by the springs. In possession of the Crystal Ball, Pesop planned to extract it but wan interrupted by Gloria who was able to use her powers to unseal it immediately.

When the El Search Party alerted Edel about a beast controlling fire, Pesop recognized the description as being that of the Holy Beast Ifritan, concerned, he believed that the Holy Beast may also be under the Demons' control. Shocked that the Holy Beast is being control, alongside Steel, the two proposed the idea of using a Metal Hair Tie that they had offered to the Holy Beast as a means to try to snap him out of his mind control. However their plan did not work, the El Search Party went and fought Ifritan and were able to hold him down. Pesop goes and makes sure the beast is still okay, which Aisha explains he had collapsed due to overexerting himself. After that, Edel and the Priestesses Gloria and Darkmoon tried to make contact with the Holy Beast.

Seeing the changes in the El wavelengths, Pesop learns on the Fire Priestess Ignia's whereabouts as well as the whereabouts of all the other Priestesses and the El Search Party. Pesop visits Edel with news, buried in work, Edel quickly states that the news was good to hear but soon returns to her work with little thought. Pesop criticizes Edel's lack of any emotions towards the situation. Edel states that she doesn't really have any connection with her and that she is a very busy person, saying she doesn't have the time to make friends with everybody. She thanks Pesop for relaying the news and places her trust in the El Search Party to keep Ignia safe.

"Don't be afraid of failure. There's a saying that goes, failure is the mother of success."