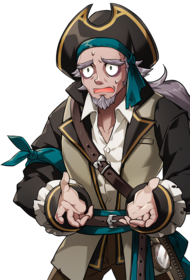 The captain of the ship departing from Velder headed towards Fluone.

The Sea, the Ship, and the Teacher

When Laby and Bellonde boarded a ship heading towards Fluone, the captain was tasking with taking helm of the ship for their voyage. Believing they could make it to Fluone even faster, the captain took the ship off course and through a monster nest, hoping that they could make it through without being detected. His decision resulted in the ship being ambushed by a gang of monsters which began to wreak havoc on the ship. Bellonde confronted the captain and he admits to his ill decision making. The captain tries to steer the ship away while Laby and Bellonde protect the ship, his efforts proved for not when they are caught up in a storm. One of his shipmates tells the captain that they're being attacked by the giant Leap Octopus. The captain, the crew, and all the passengers begin to panic as the Leap Octopus begins to destroy the ship. Laby manages to fend off the beast and Bellonde using his power, raises the ocean floor and grounds the ship. Safe, the captain and his crew begins to repair the ship, allowing them to make the rest of their voyage.