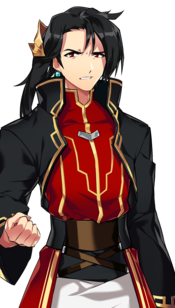 The eldest sibling of the Solace Clan. He is filled with a lust to be the the most powerful El wielder in the Kingdom. He is envious of Fenriart's El ability and believes he was cheated out of the chance to be the El Master of the Sun.

Ever since Fenriart was discovered to be very gifted with El energy, Sigmund along with many of his step-siblings were jealous of the boy, seeing him as an outcast, jealous that his Rubenian bloodline gave the boy an affinity for the El. They were envious that he would be the one chosen to become the El Master of the Sun. He would constantly harass the young Fenriart.

His abuse would not stop at Fenriart either. When the Solace Clan took in Hernia, Sigmund began to abuse the girl as well, sending his servants to bully her. He sent them to abuse the young girl and steal her necklace, however Fenriart came to Hernia's plea and confronted the servants as well as his half-brother. However, Fenriart's confrontation did not stop Sigmund from continuing his harassment of his young adopted sister.

After Sigmund had continued to abuse Hernia, Fenriart decided to face off with Sigmund with a one-on-one sword battle. Fenriart got the advantage on his brother and bested him. When Fenriart thought he had proven his point, he let his guard down which allowed Sigmund to strike him from behind. Before Sigmund could land his surprise attack, Hernia got in between them and repelled Sigmund with a powerful El strike. Injured by the little girl's attack, Sigmund was furious but collapsed.

Several years later, Sigmund devised a plan to use Hernia's gifted El powers and make them his own. He confronted Hernia and kidnapped her. He exclaimed that with her powers, Fenriart would be no match for him. He expressed his discontent with having Fenriart, that he sees as an illegitimate member of the Solace Clan, be the next El Master of the Sun, a title which he was rightfully going to dawn.

Fenriart caught wind of Sigmund's plan and confronted him. Sigmund drained energy from Hernia and absorbed it. He expressed that once he successfully took Hernia's energy, he'd be the greatest El Wielder in the entire kingdom. Before Sigmund could finish his plan, Fenriart fired El energy at him, piercing right through his body. Having taken a fatal shot, Sigmund was barely able to get out a word before collapsing dead on the floor.