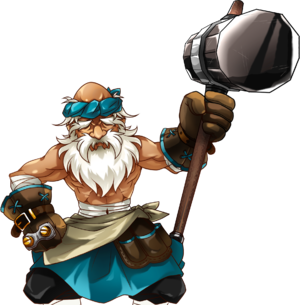 Horatio's constant smithing is the reason why he's always soaked in sweat. He aspires to become the best blacksmith in all of Elrios and devotes himself to creating the best equipment. He has a quiet but cool vibe about him, and his seemingly ageless muscular body is admired by all the citizens. In Hamel, he is known as the "Flaming Horatio".

Horatio was very close to the royal family of Hamel and a close friend with the former Lord of Hamel, Lord Rod Gess.

Penensio confronted Horatio when he was investigating the Guardian Stone discovered in Resiam Outskirts. After melting the stone and removing the rough exterior, Horatio reveals a symbol on the stone, one which Penensio identifies as being similar to that seen on the demon known as Shadow Master.

When investigating the Water Seal, Penensio went to Horatio since he was close friends with Lord Rod Gess. Horatio reveals that Lord Rod Gess was quite the opposite of his son Rod Ross, humble and not arrogant. Rod Gess felt his son was unworthy of receiving the Water Seal. Unable to tell the Penensio and the El Search Party much more, he redirects the group to Lucy, the local expert of accessories and trinkets.

Denka having recently made contact with the Water Priestess Sasha, called upon Horatio, a good friend of the Priests of Hamel, to discuss the news. In the middle of their discussion, Penensio arrives with similar news from Velder. The three talk about how Hamel has been getting better and Denka expresses great thanks towards the El Search Party for helping out and rooting out Rod Ross's plans.

Penensio asks the two about Rod Ross's current situation. Horatio tells Penensio that while Rod Ross's actions were unforgivable, his family name prevented them from simply locking him up for good. Instead Rod Ross was relocated far in the suburbs away from the main city where he no longer had power over the kingdom.