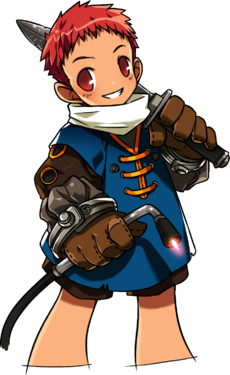 This smiling youth may not look like it, but he is the best blacksmith in Bethma. He'll have your gear upgraded and repaired in a jiffy with the skills his parents passed on to him.

The El Search Party were referred to Toma by Richian who can help wit the Cargo Airship that Wally had stationed at the edge of Bethma. The boy was ecstatic to see it, rambling on his extensive knowledge of ancient legendary airships. He is recruited to help the El Search Party sabotage Wally's ship as well as his Nasod production.

Toma points out the secondary support airship which the group board and use to approach the main airship. When the group approached Wally's airship, they wondered where Toma would go. The boy suggested his fly their current airship back to Bethma, though he had no actual experiencing piloting the vehicle. Unwilling to do so, Ain suggested he pilot the boy back. With that decided, Elsword, Aisha, and Rena hop ships to confront Wally while Ain escorted the boy back to Bethma.

After the El Search Party took off from Bethma on Wally's Cargo Airship. Portions of the ship had fallen off due to Toma's tampering. With lots of the ship's damaged parts in the area, Toma decided to salvage the parts for later use. The boy tried to repurpose the parts but ended up with huge failures on some of his attempts. Chacha Buch wander over concerned over the boy's actions. Chacha Buch tells the boy to be careful and that Stella would be on his case if he were to harm himself during one of his endeavors. Toma wonders just where the El Search Party is now, and Chacha Buch responds that they must be out there helping somebody who needs help, like they did for the Lizardmen long ago.