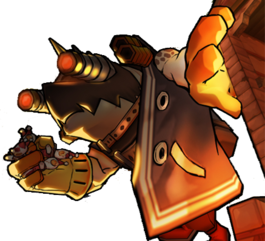 Joaquin was responsible for the creation of Buzz Drink, a special kind of Vigor Potion which brought back soldiers from the dead and amplified their will to fight tirelessly. Needing to stop and reverse the potion's affect, the Velder forces and El Search Party hunted Joaquin down at Commercial Area 1. The group were able to retrieve the notes listing the potion's composition, but Joaquin was able to escape.

During the surprise attack at Southern Gate, Joaquin as well as all the other Glitter Commanders was stationed to take out anybody trying to escape the city. He was too defeated at the last checkpoint but made his escape once more.

Despite being defeated, Joaquin still had one final trick up his sleeve. While the El Search Party were on a mission investigating Glitters at Hope Bridge, Joquin was ready with a unique form of potions which causes hallucinations. The potion send the group into a dream scape of Joaquin's own creation. The group were able to brave through the nightmare and confronted Joaquin in his own hallucinated world. Defeating him, the group were able to break out of the illusion.