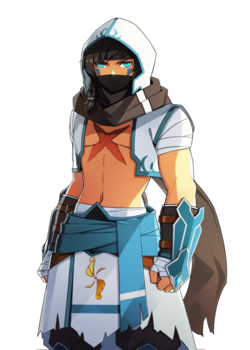 One of the Caluso Tribe's highest ranking warriors and the right hand man to Karu. He is always at the forefront of his tribe's battles.

Veiga found the El Search Party unconscious in the field of The Rage of Behemoth. Leading the Caluso, he fought to defend Sander from the then out of control Behemoth.

After Karu was freed from Karis's control, Veiga was sent to scout Parugo Mountain. When he approached he was attacked by the demons and barely escaped. He came back to Sander to alert Vapor and Emirate who feared it was already too late, and that Behemoth was soon to awaken. Veiga then alerted the group that Karu planned to excavate the Sandtilus to help halt Behemoth, informs that they need to recover Wind Stones to fuel the airship, luckily Emirate had discovered Trocks in possession of the stones by Wind Stone Ruins.

While in battle, when the Sandtilus was able to halt Behemoth, Veiga was able to sense Anduran in the Holy Beast's head. The El Search Party dived down to retrieve the Wind Priestess from Karis.