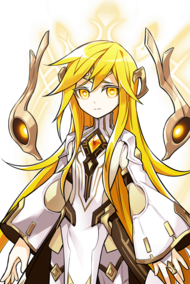 The personal guard to Adrian Nasod and ruler of Elysion. He was created to replace Herjuno who had been abandoned on Atlas. He values his father highly.

Solace and the El Lady[edit]

After Herjuno was disposed of by Solace, Adrian created Herbaon in order to take on the role of ruler and architect of Elysion. In his spare time, Herbaon would create PooPang Nasods and construct elaborate puzzles inside Adrian's Palace. Once Solace caught wind of Adrian's plot to investigate the El Lady, Solace trapped both Adrian and Herbaon inside the palace, unable to escape.

The El Search Party having made their way through Adrian's Palace, getting past Dekal, the PooPang Nasods, and Herbaon's puzzles. They come to Adrian's room, there they came face to face with Herbaon himself. Realizing that they were not actually the reported troops from Atlas, Herbaon took the offensive in order to protect Adrian. Ara noticed the similarities he had with Yuno, Herbaon piecing it together realizing they were talking about the betrayer Herjuno, Herbaon thought the party as minion of Solace. Eve tried to calm Herbaon down but he believed that Eve had been reprogrammed to do their bidding. Hoping to defend his father and restore Eve, Herbaon attacked. Having been defeated, Herbaon was still not ready to give up. Eve tried to reason with Herbaon eventually inching Herbaon to at least hear what they have to say. After Elsword explained everything that had happened, Herbaon understood the situation and expressed his regrets, being unable to have prevented what had happened.

The El Search Party needing to speak with Adrian requested the aid of Herbaon to open his hibernation capsule. Herbaon and Eve hacked into his capsule and were able to awaken Adrian Nasod.

Feeling as if he needed to play a greater role in helping the El Search Party stop Solace. Herbaon commanded his army in order to aid the El Search Party in raiding Solace's Fortress. Deep inside, Herbaon helped the group destroy one of Solace's cores which allowed them access to the deepest parts of his fortress.

Some time after the El Search Party's departure for Elysion, Herboan began to perform routine trips down to Atlas Station and during that time become friends with Nono.

When the El Search Party arrived back in Elysion, Eve and Add went to see Adrian and were first greeted by Herbaon who was glad to see Eve again. He was shocked to see Eve harmed but she was quick to dispel his concerns when Adrian showed up in the flesh. Adrian told Herbaon to escort Eve to the workshop for her to perform her own repairs which he did without hesitation.

When Eve was ready to leave Elysion, Harboan was saddened to see her leave. Eve tells him not to be so sad as they will meet again, and also tells him that goodbyes are things one will experience many of when start making friends. Hearing that, Herbaon was inclined to tell her about a secret he had been keeping, that he had made a friend in Atlas named Nono. He notes that Nono didn't want to come to Elysion but that he visits Nono often. Eve is very happy to hear that but Herbaon was unsure why she felt that way. He wonders if he will one day be able to travel like she does, Eve promising that he'll be able to come to the kingdom she will make. He is glad to hear that but would still love to have her stay in Elysion. Add hearing that caught off guard, but Eve calmed down Add's worry. Herbaon wishes farewell for himself and in Adrian behalf, as well as relaying a message to Add that his end of the offer to provide him with the energy for time travel will always be available. Add snidely declines Adrian's sentiments, Herbaon choosing to relay the message though modified to be less harsh. Add criticizes the boy for spoiling the old man. They exchange their goodbyes with Herbaon before leaving.