For one of the playable character of the same name, see Noah.

Information: This page features an Epic NPC, they are not playable nor can they be unlocked. More info can be found here.
Language:
Ice Princess 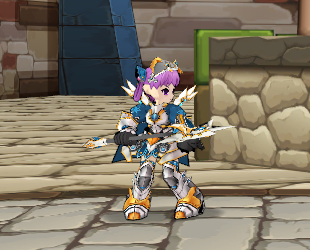 Don't let Noah's heavy armor deceive you. She is an Elemental Master in disguise! Noah has mastered the basic elemental skills of fire and can convert them all to ice skills. You will want to watch out for Ice Magic Balls when in battle against her. Noah also has the ability to freeze opponents that are right in front of her. Gather all the adventurers and come challenge her to see her magical powers!

Noah has access to all Elemental Master's combos. However, every fireball is converted to an iceball, which will inflict frostbite upon targets on contact. Noah does not have access to High Magician's XXvXX combo. Noah is also capable of summoning Ice Spikes at any range that freezes the enemy.

Noah's attacks deal very little damage. However, thanks to her Mana Shield passive, she also takes very little damage, which guarantees a very long and drawn out battle unless you have significant Additional Attack, which helps pierce her shield. As a rule of thumb, you should be packing at least 10-20% Additional Attack and Damage Reduction, but that rule applies to all NPCs.

Her strongest damage dealer, which can come as a significant surprise to players, is her Blizzard Shower - since each shard can hit upwards of three times as opposed to the usual once for High Magician's Blizzard, and on average, hits with three shards, sometimes more, Noah's Blizzard Shower can easily wipe out a chunk of your HP if she gets lucky with the hits. In fact, Blizzard Shower can be considered one of the strongest NPC skills due to this property. Fortunately, since this skill has a significant cast time, it's fairly easy to escape by running outside of the range as soon as she casts this skill - unfortunately, since many of Noah's hits land frostbite upon you, you may not have the opportunity to with lowered run/jump speed. For this reason, it's essential to have ice resist, which should be a pre-requisite to entering PVP given how popular the element is amongst player characters anyway.

Finally, a notable threat is the combination of her Frozen Step and Magic Missile; Frozen Step, with its extensive stunning capabilities, can easily ruin combos, and thanks to Noah's ability to teleport all over the map, often countering special actives as well. In team games, Frozen Step furthermore permits Noah to escape delays and wreck havoc if a target is inside her Frozen Step during a delay. While she often uses Magic Missile as a means of countering people who stay their distance, her Magic Missile deals minimal damage and is easily looped; for this reason, if Noah casts Frozen Step, it is advised that the player steer clear of her until the skill runs out. Alternatively, Elswords can use Stoic, and the girls can use ranged attacks to still deal damage to Noah as she has this special active on.