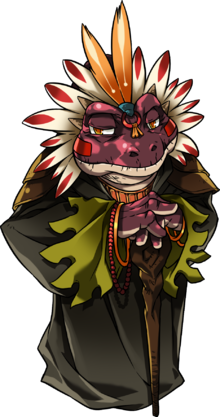 A Lizardman who resides in Bethma Village. This old Shaman's crafts have a tribal flavor to them, as do the potions he sells. Contrary to his looks, he doesn't bite (probably). He is also Vapor's colleague.

Chapter 3: The Uprising Problem of Bethma[edit]

When the El Search Party returned, they came with grave news that Berauk had too become hostile. Aisha noticed the orbs the Lizardman were wearing had a berserk spell cast upon them. Something Chacha Buch immediately recognized as a Hypnosis Orb, a signature tool of Kayak the Shadow Shaman. Elsword hoped they could free the possessed Lizardman, but Chacha Buch knew the necromancy spell had his friend long gone, he laments the loss in silence and makes it his duty to rid the spell from the land and points the group toward Dragon Nest.

The El Search Party managed to defeat Kayak and bring him under arrest by the Bethma authorities. They reclaim whatever materials Kayak had with him, Chacha Bunch uncovering that the shaman had intended to go deeper into the Dragon Nest and awaken the ancient remains of a dragon. However, with Kayak in custody and the necromancy spell ridded of, his potentially disastrous plan was no longer a cause for concern.

Hearing a huge crash in the distance, Chacha Buch wander over to find Toma tinkering with remains of Wally's Cargo Airship. Chacha Buch tells the boy to be careful and that Stella would be on his case if he were to harm himself during one of his endeavors. Stepping back, Chacha Buch soaks in the calm peaceful atmosphere of Bethma and wishes that the peace would last forever. Toma wonders just where the El Search Party is now. Chacha Buch responds that he believes they must be out there helping somebody who needs help, like they did for the Lizardmen long ago.