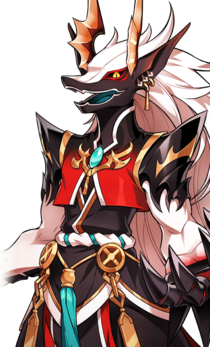 A member of White-Ghost Army, formerly a subordinate under Deborah's command, he has now sworn his allegiance to Berthe's current reign.

In the past while Aegirp was still leading the White-Ghost Army, Hadron was a soldier that served under the command of Deborah. When a Deborah and her troops were assigned to travel to Elrios for their peace negotiations and trade operations, Hadron was left behind due to him at the time being considered too weak.

Fall of the White-Ghost King

After Berthe's successful coup against the White-Ghost King, Hadron eventually fell in line under Berthe's new allegiance. During this time, the soldier began much stronger.