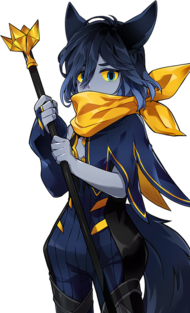 A Demon Commander working under Ran, he was stationed in the mines of Varnimyr to gather mystic stones.

Nero was stationed in the Shadow Vein by Ran in order to mine Mystic Stones for his operations. The El Search Party appeared and began to take out some of Nero's workers when they were tipped off to head to the mines. Nero confronts the ruffians but Add dismisses him for his childish appearance and timid demeanor. Nero proclaims himself was Ran's right-hand man and tells them not to underestimate him. Ara is shocked to hear he is a subordinate of Ran but Nero quickly realizes he wasn't supposed to divulge that information. The commander prepares himself to capture the El Search Party. He is cornered by the El Search Party who try to make him talk, in a desperate move he yells out that he sees a giant bat, the distraction works. Nero manages to flee then smashes the ground with his hammer, causing the area beneath the El Search Party to collapse sending them deep into the Dark Agate's chamber.