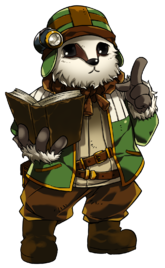 Amos is well-versed in alchemy, chemistry and science. Thoughtful despite his age, he is good at making plans though a bit too shy to carry them out. The Ponggo Alchemist hopes to help others with his knowledge. Amos usually get hooked up in his books.

When the El Search Party told the Ponggos their account at The Black Crow, Amos told them that the soldiers are augmented humans under the Nasod's control. He tell them of a time where Raven was able to break free of his control temporarily to warn the Ponggos before succumbing to its influence. The El Search Party manage to defeat Raven and cause him to go unconscious, returning him to the village.

Amos looks after Raven while also looking into the Airship they had crashed in on, wondering if it could be repaired later.

Chapter 6: The Land of the Nasods[edit]

The El Search Party return to the village after seeing the state of the Transporting Tunnel B4-1. Amos assesses the situation and tells them the path through, fortunately informing that the spores should be relatively harmless to them but to be warry of the more contaminated sectors.

After the El Search Party returned to the village with the El, Amos was quick to notice they were all worn from the epic battle and rejoiced they were now liberated from the Nasod's rule.

With Altera no longer under thread of the Black Crow and King Nasod, the Pongos were able to live without fear. Amos had been spending hit time researching and had just made some kind of break though, he contacted Adel and wanted to meet him at the construction site. Adel came but Amos was nowhere to be found, Adel instead talks with Agatha. Just in time, Amos came in with his research. Adel was uncertain what to think and wished that Amos would elaborate more about his research.

"Alchemy of Ponggo Race is famous for its high level. Will you come and experience?"