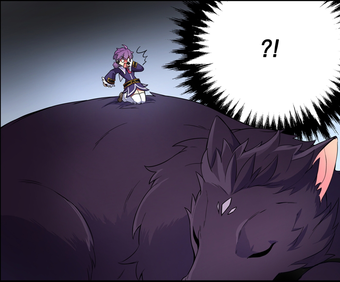 A massive guardian beast who protected the ancient Ellian ruins which possesed the location to the Ring of Mimir and her young children.

Guardian of the Ruins

The beast protected the ruins that housed it with its life. She protected the ruin's secrets and judged those who would enter the ruins if they were fit to learning its secrets. However like most living things, the beast is not immortal, eventually passing away to its own mortality. However even in death, the spirit of the Holy Beast would live on as the ruin's overseer.

When Aisha found her way through the secret entrance into the ruins, she found herself awaking on top of the deceased body of the Holy Beast. However soon the beast would fuse itself with Aisha, giving her control of Aisha's body as well as giving Aisha cat-like ears and a tail. With possession over Aisha's body, the beast took her to a chamber inside the ruins. There, Aisha found the beast's offspring. Aisha took the young beasts and promised the beast that she would protect them.

Deeper into the ruins, Aisha encountered another of the ruin's guardians, a massive stone golem. Aisha was able to defeat the guardian and protect the younglings. After doing so, the holy beast left Aisha's body and watched Aisha as she search the ruins. Just about when Aisha was about to give up on finding anything in the ruins, the holy beast took possession of Aisha's body once more and dragged her to a wall, with its power it revealed that the wall was hiding and entire hidden chamber behind it. Inside, the beast showed Aisha the location of the Ring of Mimir, and Aisha realized the beast was the trail master of the ruins.

WIth the beast's duties complete and her offspring and the location of the Ring of Mimir in the hands of someone she believes in worthy, the beast embraced with Aisha and was able to pass on. Aisha made her way back to the entrance of the ruins with the children in hand. She asked her grandfather Kuenbaran if she could take care of the beast's children as she promised, which he agreed to.

Honing onto the location of the Ring of Mimir, Aisha left the children in the care of the travelers she and her grandfather were traveling with as she and Kuenbaran search the ruins which housed the Ring of Mimir.