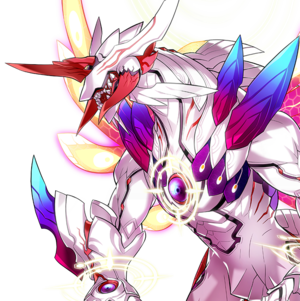 The most powerful of all the Nephilim as well as the very first Nephilim which all others originate from. The demon beast is the ruler and guardian of the spirits of Varnimyr and a worshiped god by the Dark Elves.

As the Lord of Spirit Asylum, Nephilim Lord is the oldest being in the land. The father of all Nephilim and the central body which all spirits pass through. Long ago, he became a guardian deity of the Dark Elves. During his existence, he spawned many lesser spirits and Nephilim which roam the land or protect it. Being the great spirit diety, many outsiders have also come to Nephilim Lord for guidance in their quests. Notably, Nephilim Lord has encounter countless people who sought knowledge of the Dark El for their personal gain.

500 years ago, a tower like structure crashed into the Varnimyr region. While initially cautious about the ominous structure, the lord eventually learned to pay it no mind as it had no affect on the land so long as nobody tried to enter it.

Following the guidance of the Tiny Spirit, the El Search Party and Edith's Dark Elves were able to find their way to Nephilim Lord's domain. They were however greeted with the berserk beast, the Dark Elves tried to communicate to their lord to no avail.

After a fierce battle, Nephilim Lord was able to reclaim his senses. The Lord begins to tell the group about the tower which appeared 500 years ago before he soon realizes he remembers Elsword. Since the memories of the Dark Nephilim they had fought had returned to him. He then returns to talking about the tower and how it has been emitting a strange aura these past few months that have caused the spirits and himself to go berserk. The group asks about the tower, Nephilim finding it curious that outsiders would want to tangle themselves in other people's concerns. Elsword asks about the Dark El and if anybody associated with Henir's Order had come by, Nephilim Lord stating that he knows not of Henir's Order but doesn't deny the possibility that one of many people he has seen may have been associated with the group. Nephilim then places suspicion over the El Search Party themselves, stating that he cannot simply trust them, and that they may be seeking the Dark El with malicious intent much like the group they mentioned. Elsword agrees that they must prove themselves and Nephilim Lord asks they put an end to the tower's chaos.

The El Search Party leave for the tower while the Dark Elves remain in the Asylum to mend the spirits. Nephilim Lord gets a feeling but dismisses it with uncertainty.

While El Search Party battled for their lives in the tower, Ventus and Lincy arrived in the Spirit Asylum and confronted Nephilim Lord. The two spoke with the lord about the El Search Party, the lord told them that they had set off to deal with the tower off in the distance. As they talked the tower when had been suspected to be the root of the problem had collapsed before their very eyes. Seeing that, Ventus made his leave, knowing the the El Search Party must be there and sensing the presence of the Fire Master.