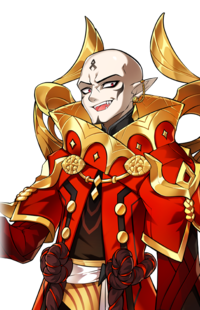 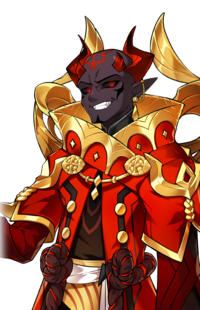 A demon who came to Elrios during the first Demon Invasion of Northern Empire. He stuck around the region even after the other forces had left and plotted to rule it for his own.

During the invasion of the North Fluone, Nenya was among the demons present during the takeover of Northern Empire. When the other demons successfully took the Moon El for themselves, they abandoned Northern Empire in search for their next target. Nenya however remained in North Fluone. During his stay in the region, he came into contact with many of the former White-Ghost Army who had since dispersed and abandoned their original ambitions of establishing peace after communication with the Demon Realm completely ceased. In the process he garnered the support of Gunther and Deborah as well as amassing his small army. Part of his imitations for his new soldier was to inject them his his own power so he'd be able to use his mind control magic if needed.

With his small army, he secretively imprisoned and overthrew the Lord of a territory in North Fluone. He allowed the area to descend into chaos without their leader before coming in disguised as a human with his small army to protect them. His ploy gained the trust of the people and he was soon enough given the position of the land's new lord. He quickly started to abuse his position and began to work the citizens of he region like slaves, additionally to prevent people from leaving he increased security at the borders to prevent anybody from coming in or out. He ruled with an iron fist, jailing or exiling anybody he wanted at will, many began to live in fear and started to do anything necessary to please their new tyrannical lord. Even going so far as to imprison his bridge builder because he tripped on the bridge he had built.

Sensing the emergence of a new powerful energy after the reawakening of Elrianode, Nenya began to panic, believing he had to push his plans further. Nenya had become aware of the former demon mechanic, Calonne, located in the mountains of the region, requiring the mechanic's talents he sent his guards to kidnap him. When the soldiers dragged Calonne to Nenya, the demon made an offer to have the mechanic make a portal to the Demon Realm for him, Calonne refused and Nenya locked him up in the prison below the keep.

Later, once news that the underground prison had been breached and all the prisoners was being released, Nenya secured his defenses. Using his mind control powers, he controlled the demon forces to protect the path to his chamber. This effort was not successful, Laby, Mao, and Calonne managed to make their way into his chamber, the demon greets his guest in an arrogant manner and puts his offer to Calonne once more. Calonne again declines, even stating it would be impossible even if he did. Nenya tell Calonne that his lord was already dead and reveals his ambition to create a home of his own in Elrios. Calonne doesn't for a moment believe Nenya's words, the demon goes on that Barkat and Berthe had killed him. Calonne still does not believe it, knowing that those two would be incapable of killing Aegirp. Nenya goes on that he's only taken over this village with his army, but requires a demon portal to call upon the entire demon army to rule the land, saying he has no fear for a good as dead king. He contemplates why the Demon King would have not invaded Elrios himself, but remembers Aegirp's plans, calling them a failed invasion compared to what Ran had accomplished. Calonne defends his master, saying that their goal was peace, and that demon like Nenya only knew violence. Nenya replying that violence is their nature.

Nenya manages capture Mao and threatens her life if Calonne doesn't cooperate. Mao desperately tells Calonne not to fall for Nenya's trick and Calonne continues to refuse. Nenya uses his power and fatally attacks Mao. However his attack would not actually kill her due to the machine Calonne had given her. Nenya reveals his true demonic form to take them both out when Laby intervenes, he faces off against the child and manages to blast her with powerful demonic energy but is surprised to see it not phase her in the slightest. Laby overpowered the demon and managed to kill Nenya for good.