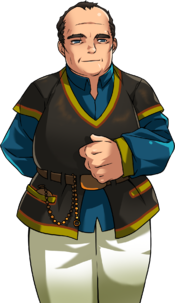 This refined fellow is the head of the Velder Commerce Association. His products are of quality, and so are the rewards and the authority one can gain from his requests. So work hard!

Chapter 2: The Secret of Wally's Castle

Hoffman is the leader of Elder's merchant guild. He is the first person to greet the El Search Party after being informed by Hagus of their arrival. Inviting the El Search Party to his home, he sits them down for a cup of tea. Hoffman informs the group that Banthus has been performing similar heists in surrounding towns as well. He also expresses concerns about the local military's actions, given the increase in bandit activity. As an initiation of trust, Hoffman tasks the El Search Party with recovering lost goods in the Shadow Forest. The group return with Banthus's Nasod Necklace and Hoffman approach Echo with the device. They begin to piece together that Wally has been the one behind the bandits and the Stolen El for his Nasod research. Lenphad attempts to start a riot but Hoffman calms him down and approach Luichel to try and start a more covert operation.

They infiltrate the castle through the Underground Waterway. The El Search Party are spotted and a full scale assault commences, an attack from within while the villagers stormed the then unprotected gate. The operation was a success with little casualties. Wally had escaped with the El and Hoffman deduces that Wally's most likely destination was the Bethma Valley, both as a good hiding place and as an ore rich mining destination. He sends a letter to Stella before sendnig the group off.

After the El Search Party drove Wally out and left Elder. Hoffman as the head of the Elder Merchants worked on restoring Elder's economy to great success with the tyrannical Wally out of the picture. With Elder doing well and everything being restored to normal, Hoffman decided to host a feast for all of Elder, to celebrate the great strives they have made to restore their village.