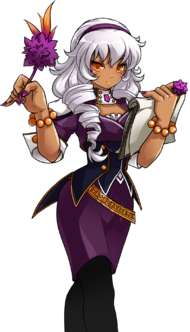 The secretary of Duke Rod Ross is also, quite arguably, his biggest follower. Daisy is very proud of her role. She likes to be trusted by others and be recognized for her work. She will do anything and everything in order to gain Rod Ross's trust. She likes expensive bags and jewelry.

Once the group successfully cleared the Resiam Outskirts, Daisy confronts Penensio that Lord Rod Ross has gone missing while making his way into Sunken Resiam. When she learns that Rod Ross may have gone to the sunken city to meet up with the Water Spirit Laguz, she is filled with immense jealousy. She pleads the group to save the Lord. When they return, she heard from one of Rod Ross's guards that a jealous merman had thrown him into the deep abyss. Extremely concerned due to Rod Ross's less than stellar athletic ability, she tells the group to make hurry and save him. Upon learning about the Coral Serpent in the area, fear floods her mind, to the point that she even passes out from anxiety. When Rod Ross returns, she was overcome with joy when the Lord returned safely.

While the group was investigating Magmanta's Cave, Daisy acted as Rod Ross's messenger to learning about what they had discovered and if they located the Water Temple. Once the Temple of Water was located, Daisy received a huge shock when she learned that Rod Ross had made his way to the Temple of Frozen Water by himself. She became very concerned that the Lord has not returned yet and urges Penensio to search for him before anything bad happens. Once Rod Ross returns, Daisy acts as his personal assistant and is the only person that could see him in person as the group gathered materials to cure his frostbite. When Penensio confronts Rod Ross, the Lord storms out with Daisy soon following. Lord Rod Ross made his way out of Hamel to the Halls of Water while Daisy remained in the capital.