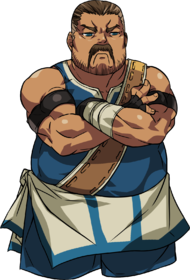 You can enhance your equipment items with Lenphad's help. People get easily intimidated by his grouchy appearance, but he really is a kind person who aims to please. Lenphad is the little brother of Hanna from Velder. He works in the same chain of equipment shops called "Swordsmith Cat" with his sister.

Lenphad is a close friend of Hoffman and younger brother of Velder's blacksmith Hanna. He was a mercenary for Elder in the past, working alongside some of the current Elder militia like Verngert.

Chapter 2: The secret of Wally's Castle

After the El Search Party raided Banthus's lair within the Shadow Forest, Lenphad arrested the bandits and sent them off to Wally's Castle while lamenting the city's soldiers aren't doing their jobs.

When the Hoffman begins to deduce that Wally may be the culprit for both the increased bandit activity and the stolen El for his Nasod research, Lenphad demanded to launch an immediate attack while Hoffman holds back to take a more covert approach.

Upon Luichel's recommendation, they sneak into the castle through the Underground Waterway. Once they had made it inside, they were eventually spotted, and an all out fight breaks loose. Lenphad exclaimed that the stealth route was no longer a viable option and stormed Wally's Castle. In the castle, Lenphad encountered his former ally, Verngert, who had been promoted to Guard Captain by Wally since they had last met. Wally manages to escape, however Lenphad is in debt to the El Search Party for their contributions to liberating Elder.

After the El Search Party drove Wally out and left Elder, the Elder Merchants worked on restoring the village's economy. After things have normalized, Hoffman decided to host a feast for all of Elder. Luichel, went to invite villagers and made her way to Swordsmith Cat to invite Lenphad. Lenphad hears somebody entered and greets them, surprised to see that it was Luichel. The two exchange how they are grateful that the El Search Party helped drive Wally out of Elder and how things have been looking up ever since then. Luichel tells Lenphad that Hoffman is holding a grand feast in celebration, to celebrate the great strives they have made to restore their village. Lenphad accepted the invitation with much gusto, so much so that Echo is awaken from her nap.