The leader of a notorious bandit group who stole the El Shard from Ruben Village.

Banthus was a notorious bandit in the rural areas of Lurensia. He had made a name for himself in both Ruben and Elder, working under the command of Wally, Banthus was hired to retrieve the El Shard from Ruben's Tree of El. Banthus sent his henchmen all around Ruben to prepare for his plans to steal the El, barricades were set up and he closed in on the Tree of El. However his plans would receive a bit of surprise when the demon Berthe also tried to steal the El. Some of Banthus's bandits would hunt down Berthe to try and retrieve his El while Banthus would storm the Tree of El while the El Search Party was distracted. While on his way, when Berthe abandoned the El Shard, Banthus stole that El and made his way to the Tree of El with Rena on hot pursuit. Rena warning Elsword and Aisha, the two also join in the hunt.

In Elder, Banthus having retrieved the El, increased the amount of bandit activity in the area. Trade routes blocked, and supplies being stolen. The townspeople growing suspicious of the increased bandit activity and the lack of activity from Wally's guard investigated the situation. When confronting Banthus the El Search Party discover that he was indeed working for Wally. Retreating back to Wally's Castle, Banthus receives a personal upgrade from Wally in the form of a Nasod arm. He and his bandits would guard the Underground Waterway knowing that it was a blind spot to getting into Wally's Castle. After being defeated Lenphad detained Banthus and imprisoned him for good. 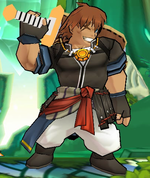 Banthus's appearance in Tree of El

Banthus will appear in Tree of El as the dungeon's main boss. 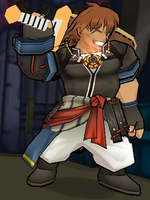 Awakened Banthus will appear in Banthus Cave as the dungeon's main boss. 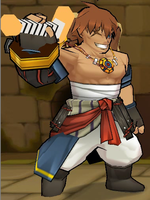 Nasod Banthus will appear in Underground Waterway as the dungeon's main boss.