The El Search Party thought the return would be simple, but it looks like it won't be as easy... 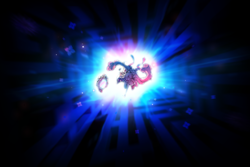 While the El Search Party decide to return to Elrianode, they are ambushed by monsters. Just when they thought it was all over, the mysterious girl, Laby, decides to come to their rescue. However, they eventually end up far deeper than they have ever. After being attacked by machines, they are under suspiciousness by Winster, but it's cleared when he learns that Laby knows him.

They make an emergency landing, due to the number of members, which hasn't been this high in a long time. The party meets Haivan, the son of Winster, and decide to retrieve the core. After getting back the core, Haivan is shocked to learn that Luciela is the Steel Queen. The group learn that Aegirp had traded with the Elrios continent. Lu considers going by herself, but Elsword and the group would rather stay together, and they, along with Winster and Haivan, decide to head to the laboratory to make a secret key.

Rena, Eve, Elesis and Laby decide to head to top level to defeat the monsters around the nest. Laby decides to reveal her feelings to Elesis, however, Rena had managed to hear them. While subjugating the monsters and talking about the realm, they hear a big monster coming over.

Elsword, Aisha, Raven, Ara and Add decide to head to the middle level with Haivan, although Haivan is really suspicious. However, they have their troubles, as Ara worries about Eun.

Chung, Luciela, Ciel, Rose and Ain decide to head to the bottom part. Luciela talks about her initial hatred for the Elrios continent and her disinterest, though Ain has his thoughts as well. Chung has slight hope when he learns that Helputt may have changed locations. Eventually, after the conversation with demons, Ain starts to doubt himself, and wonders if he's going face the change. 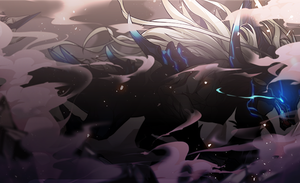 Although the group had obtained the potential key and soul, they get a nasty surprise when Haivan decides to betray the group, following his idealistic way. Despite beating the machines, however, the group, especially Elsword, is shocked to learn that Berthe is present, and stronger than eve. They were prepared to fight, but Add manages to trick them into gathering around the main power source to activate the portal, although it was Winster's request, as they return to Elrianode.

[Noah] Chapter 12: Information from the Earth

Clear the quest to follow the group's return to Elrianode.