With Denif's help, the El Search Party decides to head into the unexpected, and unknown world, which is defined by Lu as the Demon Realm. They make the first step into the first region, Varnimyr... 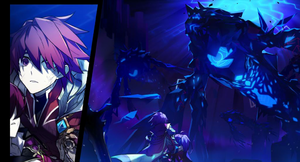 The group decides to look for clues regarding how to access the Demon Realm. After managing to get to the demon area, they are in for unexpected ambushes, and Elsword sees the group being defeated...although he gets smacked into reality. They go further, and get attacked by the dark elves, though the group is in a surprise when they meet Chloe...

With Chloe's assistance, the group manages to get Edith to stop attacking them for the moment being as Chloe explains the situation of the Demon Realm to them. However, shortly after, they are attacked by spirits, and they come face to face with Nephilim Lord, although not the same as the one from Velder. They decide to go to the tower.

They follow the Tiny Spirit to the field. They get attacked by the mysterious monsters, and they decide to head inside the tower, and subdue the Eye; the path to the center of tower opens. They are forced to fight the Malice; at the point the tower falls apart, and they're forced to fight the Recluse. However, they are shocked to learn it is actually the Fire Master, Rosso, and at that point, the group goes further.

Venturing in the Shadow Vein, Ara is shocked to learn that Nero is Ran's right handed man. However, although the group defeats him, Nero manages to escape and cause disarray in the Search Party. More surprises keeps showing up, as the spirit reveals himself as Stirbargen, one of the four Demon Rules like Lu. Ara's companion, Eun, has a grudge with him due to the bet from years ago. After the introduction and meeting, Elsword decides to reveal the truth about the vision.

Ventus decides to tell his adventures in Varnimyr to Laby.

[Noah] Chapter 11: Information from the Wind

Clear the quest to follow Elsword's story, in the next region.