After restoring the El with Elsword's help, the city had reawakened, and with it so did the Masters, but the crisis still remains. What secrets will they discover in Elrianode?

Chapter 27: The Boy and the El 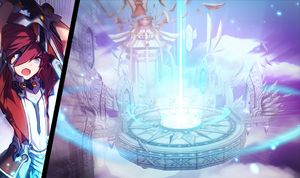 Elsword has made his decision. Sacrificing himself, the El is restored and Elrianode returns from the realm of slumber. Pierce into the El itself to save Elsword!

After restoring Elsword, they begin to investigate the Sanctum in order to find clues on how to restore the El. However, they meet a mysterious person, which Aisha recognizes as the person who stole her Ring of Mimir, the ring that contains magical powers. They chase after him, but they encounter strange monsters and they lose track of him.

The group decides to meet with Glave, the administrator of Henir's Time and Space. He's the one who made the seed, and Add reveals the forbidden experiment was to open a path to the core of the Henir. While fending off against the endless wave of monsters, Solace comes to warm them about the enemy. After defeating the culprit, they meet the Wind Master, Ventus.

After returning to the capital, they decide to investigate the Debrian Laboratory, with the help of the newest ally Rose and Zero, who came from a different dimension. However, a conversation, initially thought to be argument causes Lu to separate from Ain and the search party, although Lu reveals she's worried about Ain. She returns just in time to save Ain from disappearing due to the energy, albeit having to fight the monster that sprouted.

They decide to head back to tell about what they've discovered. Despite their troubles and worries about how to reach the demon realm, they don't have time to think as the man reveals properly himself as Hennon, and the party fights against him. Hernia decides to let the Priestesses assist, while the enemy gets stronger, but they manage to silence the adomination for good.

The party decides to recuperate. Following Ventus' advice, they decide to go to the Forgotten Elrian Sanctuary, while the priestesses and Masters decides to have their rest.

Sometime later after the El Search Party ventured into the Demon Realm, Bellonde and Laby finally arrived at the capital, Elrianode. Bellonde was very fine, but the same could not be said for Laby.

After waking up, Laby learns a bit more about Gaia's identity, but she was more curious about Denif, since she thinks he might tell her something he might know. She learns that it took three of the significant El events for her to be able to leave, though she's still relucant about tell Denif about Nisha as she listens to the priestess' stories when hearing about Calonne.

Laby is uncertain about talking about Nisha, though after the conversation with Ignia, she learns to accept sadness. She tells her story to Master Denif, even though it doesn't tell them who she is really, even though she finds the Henir's energy familiar. After meeting with Rosso, she learns that she is probably from the Demon Realm, although they don't know for sure, because the demonic energy is really similar to the one in Demon Realm, yet vastly different.

Following Ventus' advice, Laby decides to head to the Forgotten Elrian Sanctum. There, Laby learns a bit more about Nisha, and considers accepting her, but she worries that if she becomes one with Nisha, they may become one, who is neither Laby, and neither Nisha. Laby decides to ask Nisha to teach her sadness, and asks Nisha to understand her, understanding the mirror in return, which marks her graduation.

Noah has finally reached Elrianode, but despite that, the weight he has isn't going off anytime soon....

After having his identity confirmed by Denif, Rosso decides to accompagny Noah to the Debrian Laboratory.

After receiving help from Darkmoon, Noah realizes that his memories has been altered and are no longer correct. Thus, he says goodbye to his road he was bound to.

Clear the quest to learn about the unknown world, Demon Realm, and the adventure into Varnimyr.